As the pandemic known as COVID-19 grips the globe, thousands of instructors in the United States and elsewhere have been asked to transition their courses online for the remainder of the semester. To some instructors, such as the superb Classics professors at the Open University, distance learning has become a normalized pedagogy. To many others facing teaching online: this is uncharted territory. Although the SCS has compiled helpful lists of open access (i.e. freely available) resources for classicists migrating their courses into the digital realm, we might also consider the value in allowing our students to contribute to a number of online digital humanities projects that outsource the work of manuscript or documentary transcription to members of the public. In the process, students can acquire paleographical and linguistic skills; work directly with archival documents; and ultimately engage in a collaborative online space centered on enriching the public data available across the world.

There are a number of projects focused on the ancient Mediterranean which have opened their doors to contributions from the public as digital volunteers. Although the Dirk Obbink helmed Ancient Lives Project, which had sought to solicit public aid in transcribing the Oxyrhynchus Papyri at Oxford, is now on hiatus until at least July, another Zooniverse project, Scribes of the Cairo Geniza, welcomes public participation from those interested in learning to transcribe Hebrew and Arabic scripts. As they note, “Hidden for centuries in an attic in Cairo, over 300,000 fragments of pre-modern and medieval Jewish texts—from everyday receipts to biblical works—have yet to be fully deciphered.” Helpful tutorials and instructional tools guide users in learning about these ancient scripts and gently quizzes them on what they have learned. 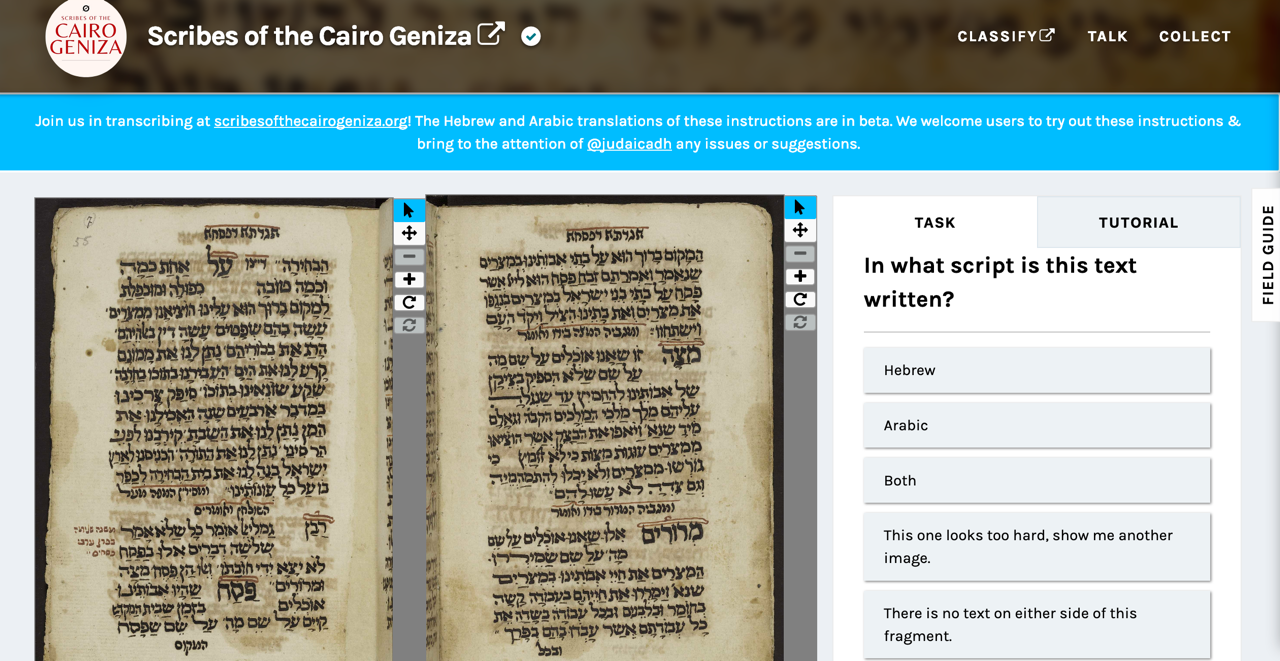 Figure 1: Screenshot of the Scribes of the Cairo Geniza project, which asks volunteers to help transcribe and engage with the scripts of Hebrew and Arabic manuscripts.

Accessibility and open data are pivotal objectives (and ideologies) embedded within these projects. Papyrologist and Duke classicist Ryan Baumann has a digital project for generating an Optical Character Recognition (OCR) coded edition of Evgenios Voulgaris’ Greek translation of the Aeneid, which is newly launched and available on GitHub. The OCR coding makes handwritten or analog texts machine readable by a computer, accessible to those with disabilities (e.g. with machine text to audio generators), allows it to be searchable, and can also make it easier to be reused by other digital projects. It is notable that students can practice adding annotations in order to increase accessibility for others. Users are asked to link and annotate ancient maps at Vici.org, to contribute to geographic data at Pleiades.org, and to make women in Classics more visible on the Women’s Classical Committee Wikipedia Project. There are 22 crowdsourcing classics projects listed at The Digital Classicist Wiki which solicit public participation.

Digital papyri, inscriptions, and other epigraphic documents are of great value when attempting to teach about material culture online––without being able to safely touch an object with students. The extensive papyrological databases linked at Papyri.info allow students to view papyri through high resolution images. It then encourages its users to sign up to edit papyrological documents, submit them for publication, publish new documents, and collaborate with papyrologists near and far. There are thousands of papyri to engage with on the site, and graduate students in particular can often get their first “micro-publication” from learning to edit and publish papyri within the collaborative environment fostered at the Duke Databank of Documentary Papyri (DDbDP).

Figure 2: Screenshot of the Homer Multitext project’s manuscript section dedicated to Venetus A.

Transcription and engagement with manuscripts is another way that Classics professors can help students to (safely and securely) gain a hands-on experience with premodern documents in Latin, Greek, Syriac, Coptic, Hebrew, and many other ancient languages they may be teaching. The Folger Library has a good list of manuscript transcription projects, and it is notable that the Homer Multitext project from the Center for Hellenic Studies was one of the early adopters of methods that engaged undergraduate students in groups to transcribe the various textual traditions of Homer’s Iliad and Odyssey. The Suda Online has benefited greatly from crowdsourcing its editing, and dozens more projects allow students to view, transcribe, and then translate manuscripts online.

Figure 3: Katherine H. Tachau, Professor Emerita of medieval history at the University of Iowa, instructs students in medieval paleography and transcription at the launch of Iowa’s early manuscripts into DIY History back in March of 2016 (Photo by Sarah E. Bond).

Some of the most extensive crowdsourcing projects may not be explicitly focused on Classics, but are still of great worth within classical civilization, history, and archaeology courses which are taught in translation and can focus on reception. The Library of Congress invites “digital volunteers” to transcribe documents addressing women’s suffrage, Walt Whitman, and Latin documents concerned with Spanish law. Helpful instructional documents and handouts teach users about Latin orthography and also provide the historical context for the document. The Smithsonian similarly solicits “digital volunteers” to help with the transcriptions of hundreds of thousands of texts, images, and maps in its rich archives.

Figure 4: Screenshot of the free PDF on “17th Century Printed Latin Orthography” via the Library of Congress’ “By the People” transcription project.

The work of transcription lets students in some way participate in the crafting of these primary source materials. Transcribing a letter or a diary entry puts the student in touch with that particular writer and that particular moment in time. And in that way, students aren’t simply reading about historical moments, they’re a part of them. They see history differently and can engage with people often invisible in the historical record.

In the spirit of sharing and working together within the digital cosmos, the code for many such projects, such as the University of Iowa’s DIY History, are often free for reuse by other digital projects that may want to develop their own site. The goal of most of these projects from universities and libraries is not to abuse the goodwill of the public or to make a profit from their free labor, but rather to harness the power of the public to democratize information.

Figure 5: The Early Manuscripts open for transcription and translation within the University of Iowa’s digital transcription DIY History project.

UCL’s participatory Transcribe Bentham project notes that in 1793, Jeremy Bentham wrote that “Many hands make light work. Many hands together make merry work.” Today, this quotation applies especially to the myriad projects that remain open online, even as libraries across the country close their physical spaces. Homerist Elton Barker perhaps said it best when he noted these “citizen science projects” as important areas for engagement and fostering intellectual openness and collaboration: “[They] help to collapse the distinction between the humanities researcher and their audience, allowing the general enthusiast and student to  become much more involved in humanities thinking.” Even as COVID-19 causes social distancing in the real world, there is still a digital space for us to learn, to teach, and to work together in the humanities. 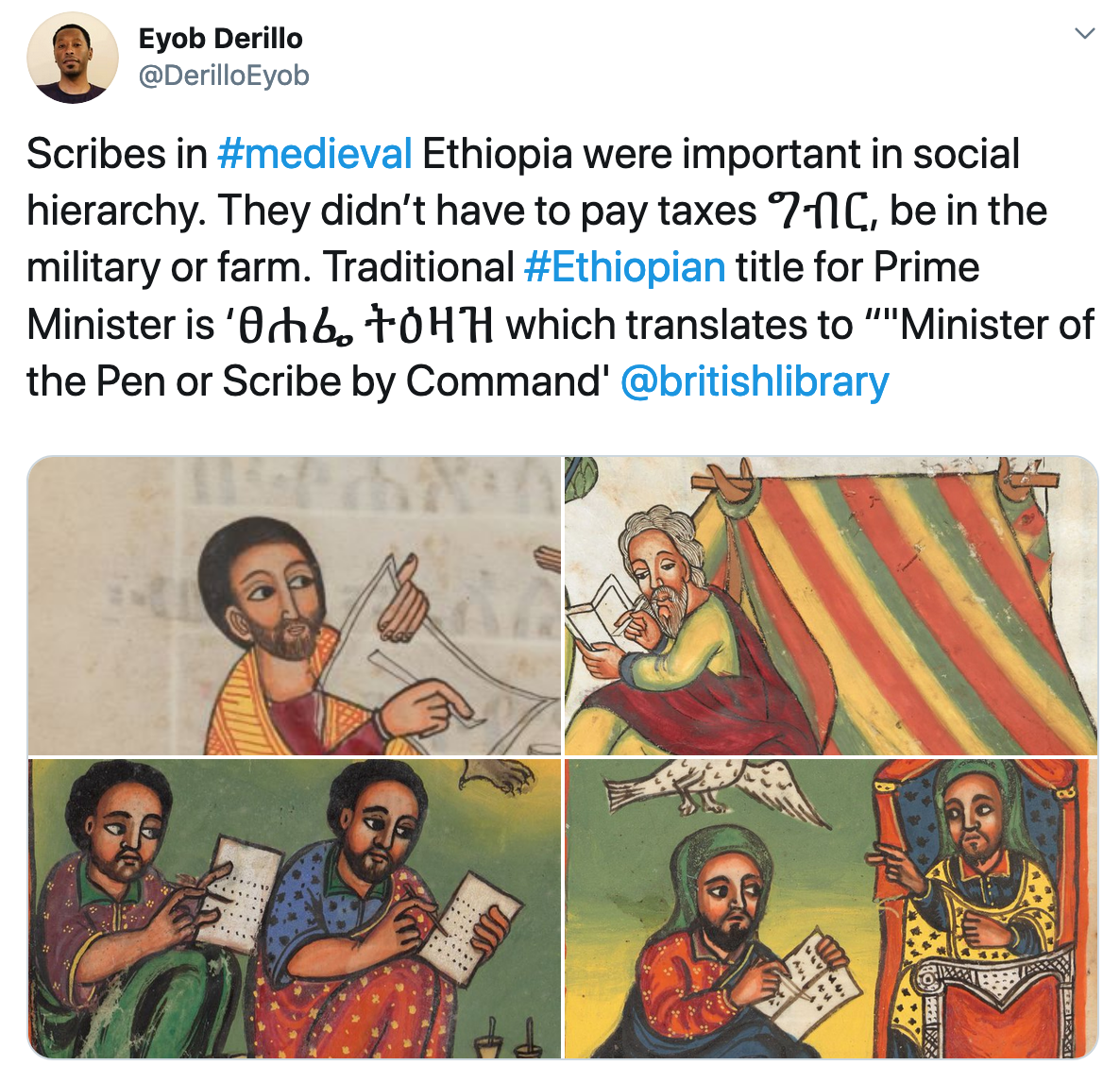 Header Image via the Twitter of Eyob Derillo, curator of Ethiopian manuscripts at the British Library. The image is of medieval Ethiopian scribes.