I got the chance to catch a showing of the new Mad Max and was not disappointed. As I do with most everything in my life, I had my antennae up for any classical allusions or appropriations. Much like Harry Potter or Dune, the names borrowed heavily from antiquity (e.g., Imperator Furiosa, Nux, Rictus Erectus), but the storyline did as well. Those familiar with Greek myth will recognize the references to the Amazons most blatantly, but Max himself also reminded me a bit of Hercules. What captured my attention most immediately was the use of chastity belts on the five wives portrayed in the film. As readers of this blog are aware, I am fascinated with the topic of Roman undergarments, so it is really only fitting that I should explore the Roman roots of the chastity belt.

Before their weddings, Roman brides donned the tunica recta, which was often made of white wool. Some brides chose to wear more saffron-colored garments. The white color indicated purity and the material hinted at the antiquity of the ritual itself. In addition to this tunic, she wore a piece of clothing called the zona or the cingulum to cinch it. This corded belt signified the chastity of the bride. Additionally, it was tied in a Nodus Herculaneus, a Herculean knot, that the husband would later untie. Varro notes that the husband had to do this in silence, though one wonders if anxious or unwilling brides didn’t tie those knots just a little bit too tight in order to communicate their sentiments to their new husband. It is worth noting here that men also wore a knotted belt. Military men often donned a cingulum with a Hercules knot tied around their midsection. In other words, such knots were not exclusive to women.

Well into the early and then high middle ages, the knotted belt symbolized the modesty and chastity of women. It held up the folds of a dress (and, hey, it showed off ones hips quite nicely!). These belts often continued to contain the complex knots they had in the Roman period, but enshrined in metal (at least the ones that survive). However, just because they represented chastity does not mean they were used in order to “lock up” the female genitalia of the Medieval period. The truth about chastity belts is that they are largely a fiction constructed in the Renaissance and Early Modern periods in order to conjure a more “barbaric” middle age that had come previously.

As Judith Bennett and Ruth Karras have argued, “In early modern Europe, these stories did what cross-cultural comparisons of women and gender have often done: they elevated one civilization and denigrated another” (2013: 2). It was likely Conrad Kyeser who first created the modern image of a chastity belt. It was for his book on war machinery, Bellifortis (1405). He noted that they were used in Florence–but is perhaps mentioning them in jest. A splendid book has been written on the subject by Albrecht Classen (2007). In it, he shows that the idea of medieval men locking up their women in metal girdles in order to stop marauding men or lustful wives is a myth that “modern” peoples constructed in order to show the lack of civility prior to their own age–much in the way that it was alleged that medieval peoples believed in the idea of a flat earth.

In the mid 20th century, anthropologist Eric John Dingwall wrote The Girdle of Chastity: A Fascinating History of Chastity Belts (1931) and alleged that such belts had existed since about the 12th century, but he bases this argument on only loose references to belts and knots. It is more likely that the idea of the chastity belt gained popularity in the early modern period as a way of conceptualizing a “backward” and dark period prior to their own enlightened era. The chastity belt actually became popular in the 18th and 19th century, rather than in the “Dark Ages”.

Recognition of the real history of chastity belts is slow in permeating cinematic and pop culture, but museums are beginning to take notice. A chastity belt from Musée de Cluny’s collection was once thought to belong to Catherine de Medici until a metal test of the metal in the 90s showed it was from the early 19th-century. In 1996, the British Museum even removed a “medieval chastity belt” from a display set up in the mid-19th century. Many early modern chastity belts were actually jokes or crude representations of ideas of the medieval world, rather than actual artifacts from the time period. What is interesting about Mad Max is to recognize that they are meant to signify the “dark age” and the lack of sexual liberty for the wives. The breaking of these locks in the desert and the freeing of these women then visually communicates their autonomy, a movement towards empowerment, and the emergence of a modern era to come… 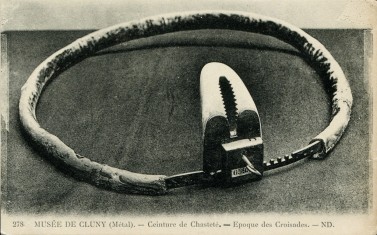