In 1898, famed Venetian architect Giacomo Boni was charged with leading new excavations in the Roman Forum (1899-1911) and on the Palatine hill. In order to get aerial photos, Boni enlisted the Italian military’s Brigata Specialisti military balloon, used by the Italian Corps of Engineers. He was amazed at the ability to more accurately draw and map the site from pictures taken 400m off the ground, and in fact took several trips in the balloon before writing his friends eager letters about the adventure.

The aerial photography taken by Boni helped archaeologists excavating the Forum Romanum to accurately plan the remains of the Forum and to create new, more precise drawings of the area. Below, you can see plans from Il Foro Romano (edited by Prof. Giacomo Boni), and an aerial photograph taken of the site (via Martin Conde’s Flickr page). Turns out that a bird’s eye view was just what archaeologists needed.

Drawing of the Four Regions of Rome.

Aerial plan of ruins in the Roman Forum. 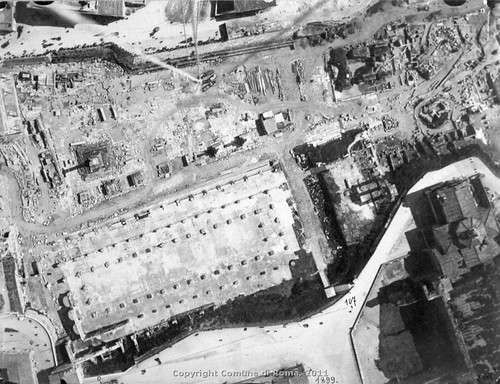 Militaries of various countries had been using the benefits provided by balloons since the late 18th century, predominantly for surveillance purposes. Balloons far predated the invention of the camera, and so the first aerial photograph was not taken until 1858 in Bievre, France. The combination of balloons with this new technology was quickly turned to in the planning of the French campaign against the Italians in 1859. The American Civil War of the mid 19th century (1860-1865) was also a notable shift, in that military balloons played a more prominent role in spotting artillery and in gathering intelligence than ever before (Sterling 2008: 13). President Lincoln even created a balloon corps during the war, but ultimately decided against the unit. It turned out that balloons tended to be a target for enemy fire (Bourgeois 2005: 94) and, well, balloons and bullets didn’t mix well.

Although many consider Stonehenge to be the first use of aerial photography (1906) for archaeological purposes, I think Boni actually beat them to the punch. Whatever the case, archaeology greatly benefited from the invention of this military technology–and this was to be the case for many decades to come.

The utilization of military technology is something near and dear to my own heart, since the Barrington Atlas of the Greek and Roman World (Princeton: 2000) used military base-maps to build the atlas. As the editor of the atlas, Richard Talbert, stated, “In particular, the (then) Defense Mapping Agency’s Operational Navigation Chart (1:1,000,000) and corresponding Tactical Pilotage Chart (1:500,000) series both offered all but complete coverage of the entire span to be covered by the atlas. Although in the case of both series some of the sheets required are produced by the British Directorate-General of Military Survey, these adhere to U.S. specifications, so that uniformity is maintained” (Talbert 2003: 11). Military maps made the Barrington Atlas possible, and were an early building block for rebuilding the ancient Mediterranean accurately.

From Epi-pens to archaeological drones to cargo pants (okay, maybe that last one is more a detriment than a benefit), military technology has had a great deal of influence on our everyday lives. Archaeologists in particular have benefited not only from the development of cameras for military balloons, but also the creation of Global Positioning System satellites launched by the U.S. Department of Defense in the 90s. Actually, you can thank President Clinton for making the system available to civilians in 1996.  This is a short post to remind us all of the debt we owe military engineers. Archaeologists in particular have benefitted from the military’s continued drive to develop new technology, even if war itself destroys the cultural heritage we hold dear.