Yesterday on the Forbes blog, I discussed recent attempts to reconstruct the ancient busts of Palmyra damaged by ISIS and repatriate them back to Syria. As I suggested in the post, such efforts highlight the import of digital methodologies such as 3D printing and photogrammetry, but also underscore art as an umbilical cord that allows us to create an emotional connection. Much like Delphi, art is often an ὀμφαλός (Greek for ‘navel’).

Palmyrene funerary busts in particular are an evocative medium that forces the viewer to make direct eye contact with the Syrians of antiquity. When I was at the Vatican Museums recently, I was amazed to see both children and their parents actually pausing on their way to the Sistine Chapel in order to gaze at the Vatican’s small collection of Palmyrene busts (a selection of which are below). 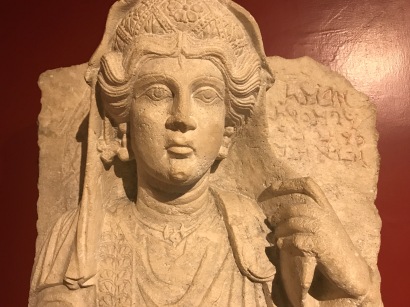 Here are a few projects and resources for investigating ancient Palmyra (and a few other sites) online, although this is by no means a comprehensive list.

Memory Matrix (MIT): An aesthetic project using digital technologies to recreate lost structures from the Middle East. As they note: “The Memory Matrix is a monument that explores the possibilities for future heritage creation, employing new fabrication techniques and transcultural workshops. The Matrix is made of border fences carrying over 20,000 small fluorescent Plexiglas elements. These elements are laser cut with holes outlining vanished heritage from Syria, Iraq, Yemen and beyond.” This video is amazing.

Memory Matrix at MIT from Azra Aksamija on Vimeo.

The Legacy of Ancient Palmyra (Getty Research Institute): As per usual, the Getty Research Institute has used its massive digital archives and powers of good curation for good. Check out the Palmyra site map, the large collection of travel photos, and the resources for research on Palmyra. In the “modern” section, there is a helpful (if rather upsetting) explanation for why those portrait busts became collected by museums in Europe and the U.S. following the expansion of travel tourism in the 19th century: “As tourist photographs of the site began to circulate more widely, so did Palmyra’s artifacts, especially the famous funerary portrait busts (some of which are featured in this exhibition). Today, one can see thousands of Palmyrene antiquities outside the region: in American, Western European, Russian, and Turkish museums that had been secured during the late Ottoman rule (1876–1922) and subsequently during the French Mandate (1923–46).”

Monuments of Syria (Dr. Ross Burns): A list of the historical sites in Syria. There is an area of the website just for Palmyra. There are lots of historical images and primary sources that can easily be put into a syllabus for educators. It also explores the destruction of monuments that has thus far occurred during the Syrian Civil War and the encroachment by ISIS.

“On the Polychromy of Ancient Palmyra” (Alex Nagel, Smithsonian Institution): A post on the polychromy added to Palmyrene portrait busts. The Smithsonian has indeed been engaging in analysis of the polychrome remnants left on at least one bust in their collection. As Nagel remarks about a particular limestone relief with remnants of red on the jewelry: “Microscope images would make painted details much more visible and a red colorant on the statue has recently been identified by scientific analysis. Qualitative elemental analysis of a small sample taken shows the presence of Al, Si, Ca and Fe with a strong presence of iron.”

On a side note: You can often see the red left on inscriptions from antiquity. Red paint was applied to make them stand out to readers; a common use of color for textual emphasis. In the middle ages, manuscript assistants called rubricators added red to certain letters to make them stand out. There is even a famous monk known for his ability to apply red, who was given the nickname Rubricius.

Sketchfab and Palmyra: As I pointed out in the Forbes article, there are a number of 3D models popping up online which are either made on-site from a museum bust or from a composite of photos that produce photogrammetric data that can be used to create a 3D model. As I have written about before, there are indeed ethics that must be applied to 3D printing cultural heritage and there is indeed the danger of “digital colonialism”–particularly if the object is not contextualized or you are making a profit from its display. Right now my favorite model is a 2nd-3rd c. bust from the Louvre.

Head of a woman
by shadows44
on Sketchfab

These are just a few of the interesting digital projects focused on Palmyra right now. My hope is that the creation of both digital and museum-based relationships to the Syrian past will not only make us reflect on current cultural heritage issues, but also serve to create a connection to the present. Syria’s civil war continues to take the lives of thousands of civilians and the death toll now stands at close to 500,000. Consequently, these digital projects are fantastic, but we must keep in mind that accepting the art of Syria but rejecting its people is not an option.