Last week, Candida Moss and I were lucky enough to catch the tail end of The World between Empires: Art and Identity in the Ancient Middle East, an exhibition which opened March 18 and closes on June 23, 2019 at the Metropolitan Museum of Art in New York City. The 190 objects within the exhibition acquired from museums in the United States, the Middle East, and Europe were meant to serve as a prism through which we could view the various networks connecting “southwestern Arabia, Nabataea, Judaea, Syria, and Mesopotamia, making the region a center of global trade.” Although I do not have the background in the Middle Eastern antiquities trade needed to review the exhibition in the manner that Michael Press did for Hyperallergic, I felt as though I could provide some photos and a bit of analysis of the evidence for trade through the pigments that dotted the show and revivified the ancient world.

Babylon: The “Statue of a Standing Nude Goddess” (Babylon, 1stC BCE-1stC CE, on loan from the Louvre in Paris) is the icon for the entire show. She is made of alabaster, gold stucco, bitumen, and rubies. The statuette comes from a tomb discovered in 1862, laid near to the head of a wooden coffin. Rubies often came into the Roman and Parthian empires from trade with Burma, Sri Lanka, and Siam.

The “Statue of a Standing Nude Goddess” (Babylon, 1stC BCE-1stC CE, on loan from the Louvre in Paris).

Dura-Europos: The only intact surviving example of a Roman scutum is a painted rawhide and wood shield from the early to mid-3rdC CE found at Dura-Europos in Syria. Along with many of the objects from Dura-Europos within the World Between Empires exhibition, their home institution is now Yale University Art Gallery. In her essay for the Dura-Europos: Crossroads of Antiquity volume from 2011, Yale University conservator Carol Snow remarked on the colors on the shields found at the site:

Layers on the other shields were found to contain gypsum and lime white ground, red and green earth pigments, carbon black, vermillion, and indigo over a substrate of pine, presumed by Professor Samuel Record of Yale to be Aleppo pine. These shields were cleaned mechanically in the field to remove burial dirt, and the paint was consolidated with polyvinyl acetate, the same synthetic resin that Pearson used on the wall paintings.

Only a few years ago, the Dura-Europos wooden shields underwent extensive x-radiographs and x-ray fluorescence spectroscopy in order to decipher the pigments that should be used for restoration. Particularly impressive is the analysis done on the Roman parade shield found there with scenes from the Trojan War. Technology is clearly allowing for polychromy to be reimagined in new and important ways. But these myriad objects from Dura-Europos (along with the frescoes in the exhibition), also remind viewers of the vibrant color of antiquity outside of the city of Rome.

Petra: One of my favorite pieces in the exhibition was a 1stC CE architectural ceiling roundel excavated from the “Baroque Room” in the Great Temple at Petra. It has blue and red pigment remaining on the stucco.

Architectural elements are often overlooked for more sensational figurines, frescoes, and epitaphs within museums, but I loved thinking about how white, red, yellow, and blue pigments covered the ceiling and walls in the structure. When most people in the U.S. think of Petra (if they do), it tends to be as the ubiquitous color of sand captured in movies like Indiana Jones and the Last Crusade. In reality? Nabatean statues and architecture were often painted in vibrant colors at Petra, just as they were most other places in the ancient Mediterranean.

The roundel also made me wish we still had the pigment preserved on the limestone elephant capitals from Petra’s Great Temple which are also on display in World Between Empires. 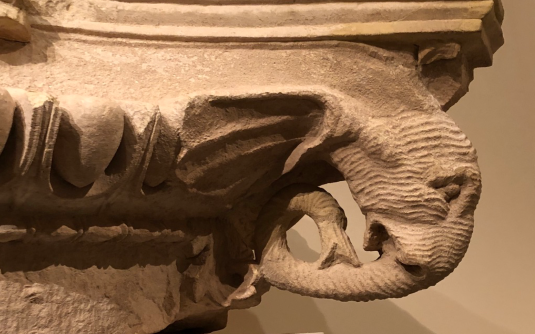 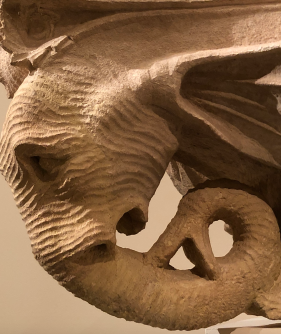 Many of the items from Jordan will notably return to the newly opened museum in Petra. While only opened on April 18, the museum is accessible to those with disabilities and is a welcoming space to both tourists and locals. It was funded in large part by the Japan International Co-operation Agency, but most of the exhibitions and curatorial decisions were made by Jordanian art historians and archaeologists. A trip to Petra is no doubt an elite expense, but one hopes that the Met exhibition will incite a new interest in visiting museums and cultural heritage sites outside of the United States.

Judaea: While the bronze statue of Hadrian was perhaps the biggest draw on loan from the Israel Antiquities Authority, my eye was caught by the famed mirror from the “Cave of Letters” found in the Judaean desert. It is made of copper, lead, wood, leather and parchment. As the Israel Museum notes, such quotidian objects found together (e.g. the glass bowl, basket, and jewelry box found with the mirror) from the “Cave of Letters” tell us a great deal about the everyday Jewish women who participated in the Bar Kokhba revolt in the mid 2ndC CE.

The Cave of the letters, used as a refuge place by Jewish rebels at the end of the Bar Kokhba revolt, yielded a variety of personal effects that the women of the company had taken with them into hiding: wool, spindles and thread, jewelry and jewelry boxes, sandals and other clothing items, mirrors, and fine housewares.

These are just a few of the colorful objects that caught my eye in this luscious exhibition. There is is no doubt that there are problems of provenance and museum acquisition glimpsed at within World Between Empires; a fact noted by Press in his Hyperallergic review. But there is also a potent message to visitors throughout, one which asks viewers to consider the impact of the looting of cultural heritage today in places like Iran, Iraq, and Palmyra.

World Between Empires is an impressive material metaphor for the breadth of the ancient world; stretching as it does across the many cultures that constituted the Silk Roads and beyond. I am delighted to see academic and, in turn,  popular interest in these areas expand through the work of Peter Frankopan and others in our field today. My hope is that through these objects, those in the United States will perhaps come to better understand, appreciate, and value the ancient and modern people of the Middle East in ways that counter many of the xenophobic narratives of the Trump Administration. If World Between Empires had one thesis statement that we should listen to, it is that these cultures are worthy of admiration and preservation.

Philip Kennicott, “The World Between Empires’ helps dismantle the myths of Rome,”The Washington Post (May 15, 2019).

Michael Press, “Investigating Origins and Cultural Heritage at the Metropolitan Museum,” Hyperallergic (May 2, 2019).

Peter Frankopan, The New Silk Roads: The present and future of the world (2018).

Raoul McLaughlin, The Roman Empire and the Indian Ocean : the ancient world economy and the Kingdoms of Africa, Arabia and India(2018).