When I was a kid, I was obsessed with collecting the signatures of the Atlanta Braves baseball players. It was a point of pride to show my friends the signatures of John Smoltz or Greg Maddux, and they provided me with a little residual cachet. Turns out that Romans had much the same reaction. The natural historian Pliny the Elder (NH 37.15) remarks that in the first century BCE, the dictator Sulla’s son-in-law was rumored to have a penchant for collecting rings in a cabinet called a dactyliotheca (Gr.δακτυλιοθήκη). Male and female Romans wore rings on the finger next to their pinky on their left hand–i.e. their ring finger (Aul. Gell. 10.10). Many of these were signet rings used to seal documents with wax or even clay in a design specific to an individual.

At first, these rings were made of iron and later of gold. They often passed from elder to younger kin within a family for use over several generations. Scaurus is an early example of an autograph collector who hunted down these seal rings for himself. He also started a trend. Not to be outdone (particularly not by someone related to Sulla!), Pompey later donated to the Capitol a ring that had belonged to King Mithridates. In the true spirit of one-upping, Julius Caesar then dedicated six ring cabinets to the Temple of Venus Genetrix.

Long before the ascent of Greece or Rome, seals were used in ancient Near Eastern civilizations. Yet they were not just the purview of kings and dynasts. The Walter’s Art Museum has an Akkadian cylinder seal from 2350 BCE inscribed with the name of the owner: “Ur-Inanna, the farmer.” Using someone else’s seal could connect you with legitimacy and power. Ergo, Octavian may have used Julius Caesar’s ring as a signature at first, before adopting a Sphinx signet found among his mother’s rings (Plin. NH. 37.10). Briefly, Octavian used Alexander the Great as a seal, before becoming more confident in his role. During the principate he used an image of himself created by the artist Dioscurides (Dio 51.3.6; Suet. Aug. 50). He used it to seal diplomata (military diplomas), epistulae (letters), libelli (petitions), and other documents. It was this seal that was used by later emperors as a mark of the position of Augustus. Continuity in seal symbolized a continuity in power.

As I have written about before, the proliferation of artist signatures on vases, mosaics, gems, and other works do give us some famous autographs. These inscriptions were a popular way to advertise one’s personal creations or to signify the work of a particular workshop, and people definitely collected such signed works done by well-known artists in particular.

The word “signature” comes from the future active participle of the Latin verb “signo”. Thus signaturum is “something about to be sealed or marked.” Roman signatures didn’t just come in the form of waxen seals. Greeks and Romans also signed their names (often with the date appended) in order to authenticate certain legal documents. To write something with your own hand was in Greek called αὐτόγραφος. Transliterated, this later became the word “autograph.” The historian Suetonius (Ner. 10) relates an anecdote about the emperor Nero’s reluctance to give an autograph. When asked to sign the death warrant for a convict, the emperor lamented that he wished he had never learned how to write.

In Roman law, this official underwriting was called a subscriptio, and was akin to the modern idea of the use of a signature as a judgement–a kind of signing off on a verdict. Witnesses to documents also signed on the bottom, as exemplified in a grant of citizenship given to Mauretanians under the reign of Commodus called the Tabula Banasitana. A number of witnesses’ signatures were copied onto the bronze tabula from the original document (a tabula was quite an expensive Xerox copy) in the late 2nd c. CE.

As Elizabeth Meyer has written, any subscriptio only added value to a document. Scribes and slaves often wrote letters for their masters, such that we don’t get the handwriting of the individual writing a letter except in legal documents requiring such a subscriptio. Even an imperial subscript or letter in the emperor’s hand said only “Vale”–“Farewell!” if a full subscript wasn’t needed (2004: 210). It was usually the seal that truly stood in as the personal signature of the man or woman sending the document, though later Roman emperors could also use special purple inks to denote their identity.

Although Greece and Rome had strong oral relations for business negotiations, there were times when regular individuals also had to sign their signature on a document. If they were not literate enough to sign their name or had extremely bad eyesight, they could hire a ὑπογραφεύς (a subscriber) to sign for them as their proxy.

These scribes had to practice their signature just like everyone else. We even have papyri illustrating a scribe named Petaus who over and over wrote the formula for a proper signature: Name + Title + “I have submitted.” Such scribes served as a kind of notary that could authenticate and sign documents for their clients, but they were often related to the individual in some way.

Well into the period of Late Antiquity, signatures remained potent and validating. They were required on documents produced during Church synods (In 325 CE, all bishops present–except those that had abstained– had to sign off on documents from the Council of Nicaea) and we have a number of them on early medieval charters. Many of these have been fabulously collected and written upon by Ainoa Castro over on the Visigothic Script blog. Both scribes and bishops developed their own distinctive monograms, signatures, and scripts in order to authenticate documents. These documents were often prized by churches and archives, and carried around by individuals as, say, proof of ownership or citizenship. Seals also continued to be used well into the middle ages, as evidenced by the database of Byzantine seals (called bullae in Latin) at Dumbarton Oaks. The one below is a 10th or 11th c. Byzantine seal that reads: Κύριε βοήθει τῷ σῷ δούλῳ Μαριανό κυβυκλισίῳ κὲ βασιλικό κλιρικῷ: “Lord, help your servant Marianos kouboukleisios and imperial cleric” (trans. Dumbarton Oaks). Such official seals were collectors items as well as authenticators. 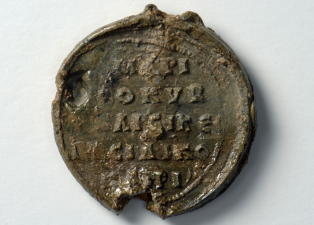 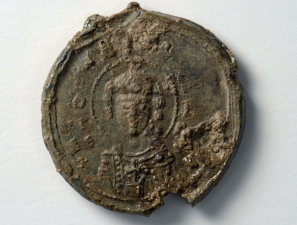 Although imperial seals and autographed documents had been collected by cities, archives, and sometimes individuals in antiquity, the taste for signatures as transportable marks of status took hold particularly during the Renaissance of the 15th century. Manuscript hunters put great stock in possessing old documents and authenticating them, and the craze for vestiges of the past extended to the signature. Into the 16th century, people also began to collect the signatures of their friends and family members. These were called alba amicorum (“albums of friends”), and they were simply a way of showing off ones networks of friends. Think of it as a a Renaissance Facebook wall that could be displayed at parties or in houses, in order to gloat about the high and mighty people you had connected with.

Well into the Early Modern period, people continued to collect such albums and to keep visitor books at the front of their house in order to show off the list of people who had come. A small, magical part of a person was transmitted via a signature–producing an artifact that could be revisited over and over, even if the person was absent or dead. Certain signatures became recognizable (e.g., I can to this day still recognize a Thomas Jefferson signature), and the diversification of names (unlike most Roman names, which were rather limited in scope) allowed for the personal signature, rather than the seal, to become a much more individualized touch. Official documents carried signatures, and were displayed with pride–just as they had been in antiquity. I have a bunch of diplomas on my office wall functioning in this manner right now.

Collecting books with signatures from famous authors or owners remains in vogue, and many still cherish any evidence of touch or contact with a celebrated person. Signatures continue to function as a means of verification and a visualization of a social network. Much like Twitter or Facebook, which use our chosen profile image as our seal and personal signature to be left in the comments section, autographs showed the popularity, networks, and import of an individual to all who view it. As in antiquity, a name, seal, or complex monogram was a powerful thing to confer and to receive. Whether in wax, on papyrus, or on paper, people tapped into this transferrable potency by collecting and then displaying signatures as form of social currency to be spent again and again.