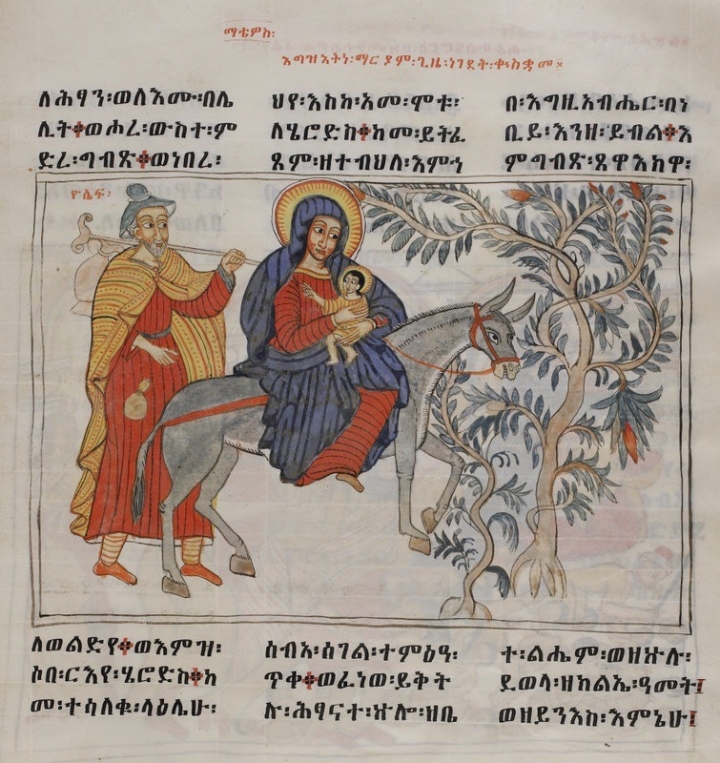 This week over at Hyperallergic, I wrote about new exhibits at the British Library and the Victoria & Albert Museum which both engage with the cultural heritage of ancient and medieval Ethiopia. An examination of the Ethiopian cultural heritage held in the libraries and museums of Britain can perhaps demonstrate a seminal point about digitization and the digital humanities more broadly: Digital editions can never fully replace an analog object. No matter how many manuscripts we digitize and make available online or 3D scans we create of the Parthenon frieze, they are not a replacement for repatriation.

One reason for both of the UK exhibits this year is the 150th anniversary of the British army’s Abyssinian Expedition of 1868. The campaign was ostensibly in reaction to the holding of British hostages by Tewodros II (also called Theodore), who was the Coptic Christian ruler of Abyssinia; the core of what is today called Ethiopia. Ethiopia has been a Christian country since the fourth century CE, making copies of the Gospels and the stories of saints a central part of their rich manuscript tradition in later years.

The emperor ultimately committed suicide as 13,000 British military troops descended upon the capital city of Maqdala (or Magdala). The hostages were freed unharmed, but the expedition ultimately became more about treasure than human life. It reportedly took 15 elephants and 200 mules to haul all of the loot from the decimated region. In a manner rather reminiscent of the Siege of Jerusalem (70 CE), priceless cultural objects were pilfered and then sent to London for sale.

Many of the manuscripts, royal crowns, and other precious cultural patrimony were sold at auction to various British cultural institutions: the British Museum, the Royal Library, the Bodleian Library at Oxford, Cambridge University Library, the John Rylands Library, the South Kensington Museum (later renamed the Victoria & Albert), the Museum of Mankind, and the National Army Museum (Ofcansky and Shinn 2004: 48). Although not online, it has been widely reported that at the Bodleian Library there is a penciled notation on a manuscript (MS Aeth. d. 1) that states in English,“taken from a church at Maqdala in 1868.” There is little question where many of these objects originally came from and how they were acquired.

While institutions such as the V&A have discussed the idea of a long-term loan in response to Ethiopia’s current demands to repatriate these objects, most have refused. The cynical part of me thinks that agreeing to repatriation of some plundered objects would then, to their minds, open the doorway for the emptying out of many British museums and libraries.  Meanwhile, there have been extensive digitization efforts directed at making these objects available online, particularly for those Ethiopian manuscripts held at the British Museum.

Ethiopian manuscripts are some of the most richly illuminated Christian texts known. The British Library’s Eyob Derillo, who spoke with me for the Hyperallergic piece and Prof. Michael Willis (University of Oxford) have together created a comprehensive list of Ethiopian manuscripts on Wikipedia.  Within the United States, the Walters Art Museum in Baltimore has, to my mind, done the best job of digitizing their Ethiopian manuscripts and making their acquisition history transparent online. You can see all digitized items in this collection on their website.

As I was writing this story, I began to ruminate on the similarities with Native American heritage in the United States. When I was an undergraduate at the University of Virginia, I excavated at the Monacan Indian site of Monasukapanough near Charlottesville and then worked for a semester on the “Astor Collection” with anthropologist Jeff Hantman. This was a collection of Native American objects gifted to the university by Lady Astor in 1937 [UVA database here], which consisted of artifacts that had decorated the Astor Hotel in New York City. It sat in Cabell Hall for many years with little attention.

In 1990, the Native American Graves Protection and Repatriation Act (NAGPRA) passed and required the university either to return many of these objects back to their native tribes or give them to the National Museum of the American Indian in D.C. To my knowledge, there is no international law akin to NAGPRA that governs colonial and imperial plunder in Europe, but that doesn’t mean there shouldn’t be.

I learned a lot while researching these manuscripts and am indebted to Eyob both for his aid and his incredible efforts to make these texts visible on Twitter and online. However, I was left with many more questions than answers as concerns the ethics of digitization of cultural heritage in the digital humanities. Although I do not want to discourage museums or libraries from making objects and texts available online, I am concerned that some are using digital humanities projects as a replacement–a half-hearted apology– for the act of physical repatriation. To my mind, no digital humanities projects will ever be able to make amends fully. As we learned with NAGPRA here in the U.S., part of acknowledging our mistakes is giving oppressed groups agency over their own cultural heritage.

5 thoughts on “Digitization ≠ Repatriation: When Digital Humanities Provides Access But Not Restitution”